This handbook is not here to restrict your buildings. It is here to guide you on how you can build and provide examples of what you can and cannot do and explain why, so that you can once again explore different bases whilst being provided with basic guidelines and examples.

Welcome to the building handbook. In this document you will find all of the key information needed to build legal bases which abide by all of the rules. It will cover the basic defences you can and can’t use with reasoning as to why, this means you will not be stuck with exactly what is in the guide, but instead are well-informed on how you can build legal bases. So long as your builds correspond with the rules that are explained in the contents of this handbook, you should be free to experiment and create your own unique defences (however, if you are not sure if it’s allowed or not; always use the F6 function in order for a staff member to come and check the base design).

To make life a lot easier, there are some Basic Guidelines in place. These guidelines must be followed at all times. Most of these guidelines are already implemented into a rule but not specifically stated within the rule. They are as follows:

There are two rules which cover building base defences, 3.9 Placing Props and 3.10 Realistic Construction. We recommend you read these rules in addition to this handbook before constructing a base defence. If you place props but you let other players freeze them, you are responsible for those props and if they are found to be against the rules, you will be the one getting the punishment for it. Always make sure other players place your props in a way that is allowed within the rules.

Here is a list of the most common props that are allowed to be used in defence building:

You can use as many of these props as you please, so long as they follow the basic guidelines & rules found above. Here is a list of the most common props that are not allowed to be used in defence building:

These props may be used if the building is being used for non-profit purposes.

A headglitch is when a raider cannot see a defender's head and shoulders when stood behind a defence. The images below illustrate an example of this.

The image on the left is considered a headglitch and is not allowed. The right image is an example of what is allowed within the rules. Headglitches come in many shapes and forms, any form of a headglitch is not allowed and will be removed. The player that owns the prop(s) will also be notified and possibly punished, if found necessary.

A One Way Visibility is when you place props in a way which causes you to become invisible or really hard to see. The images below illustrate an example of this. The image on the left is considered one way visibility and is not allowed. The right image is an example of what is allowed within the rules.

The images below are both examples of where directing player movement is occurring, this is because if a player were to walk into the base they are forced to go one way and it funnels raiders/players to go one way, therefore it is a violation of rule 3.8. 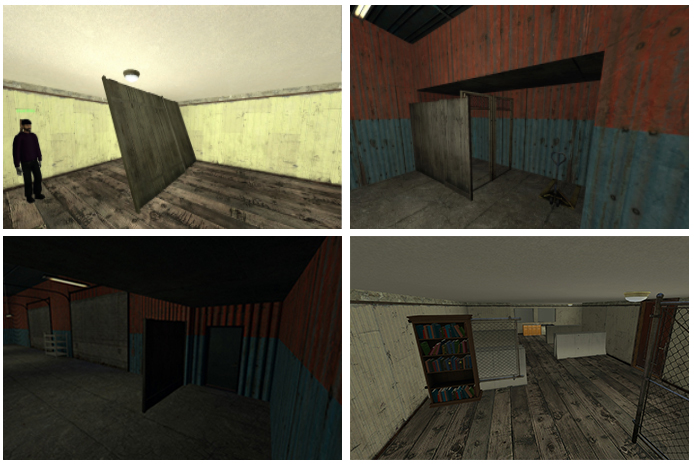 To avoid this rule generally you want to ensure that 2 people can fit side by side everywhere in the base and there is more than one path to places in the base that are being utilised. This means if you are not using a room to grow, you do not have to have two people fitting through one place.

Drugs must be placed in locations where they would be accessible by players without jumping or crouching, be it through a player made, or natural map structure. This also includes if the user in question has to jump or duck to move a planter box. This also includes growing in the back of a vehicle.

The first image shows a player made structure preventing players from accessing or moving the planter without the need to jump. The second image shows a map structure doing the same thing. Neither of these are allowed.

Bunker like defences such as the one pictured are disallowed. Barricades should never be placed onto ceilings or suspended off the ground in general. 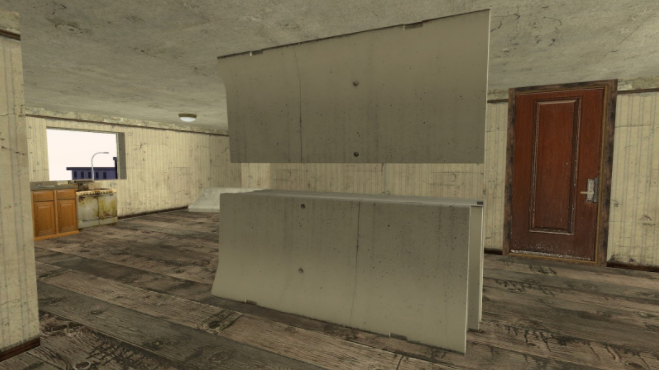 Any items you place should be able to support themselves in that position in real life.

On the left, there are no head glitches, the bases can fit two people side by side through every important passage and there are no one way / pixel peeks within the bases.

So what's wrong with the right side? In the first image, there is a pixel peek in between the two lights and the bookcase is directing player movement. In the second image the barricades direct player movement to the left as you can't fit two players between the gaps in the barriers.

The defences shown on the left do not show any signs of directed movement, the lamps are pointed in different directions with a maximum of 3 in 1 general direction and you don’t have to jump anywhere to get in. The spotlights are a great enough distance from adjacent spotlights and bookcases to not cause near-one way visibility.

The bad example shows an entrance that is directing movement to the right, which is a common mistake that is made. It also shows a common pixel peek used whereby player's on the balcony cannot see into the room but defenders can see out.

The metal detectors are placed at the very top of the stairs, in a place and way that movement is not impeded. Placing them further down would not be allowed. The rest of the base is built in such a way that there are spaces more than large enough to fit two players, but are not so small that it is ineffective. There are also no one-way peeks or head glitches.

The images on the right are directing player movement by forcing players down a predictable path, with props forcing movement on entry points to the main area. It is also shown that the barricade on the balcony creates a headglitch to players below them. You may not block the elevator at The Office.

The defence on the left does not direct movement and the spotlights are placed in such a way that they are a considerable distance from the bookshelf, not causing any sort of headglitch.

The defence on the right is not allowed because it creates a funnel that people must walk through, making attackers easy to kill by defenders and directing movement heavily.

The defences on the left are good examples of base defence at any one of the large suburbs houses. They do not direct movement in any way.

It's certainly crammed but the base on the left has enough space for two players to move through it, and it does not direct player movement from either entrance to the main area of the base.

The first bad example is not permitted due to the metal detector no longer allowing two players to fit through, forcing them down an elaborate and predictable pathway. The second example isn't allowed due to it being an elevated defence, where the defender stands on the bed to shoot down at the attackers.

Player's may block off two entrances to parker due to there being four in total. The first image shows a good example of a parker defence. The entrance directs movement up to the width of one half wooden fence, which is permitted here.

The second image isn't permitted as it contains an elevated defence, there is directed movement at the entrance with two full wooden fences. The concrete barricades are also too tight together causing further directed movement.

Similar to Parker, there are four total entrances to Glass Co which means you can block up to two entrances. The first image below is fine as there is sufficient space for players to move around without restriction.

In the second image, there is clear restricted movement, giving a disproportionate advantage to the defenders.

In the good example there is sufficient space for two players to fit through the entrance and there is enough space for the player to move to the back area unobstructed.

In the bad example there are tight gaps where two players could not fit through, and excessively directed movement at the entrance.

In the good example there is sufficient space for raiders to move around, no head glitches.

In the bad example, there is directed movement and insufficient gap for two players to fit side by side.

In the good example there is sufficient space for raiders to move around, no head glitches and a reasonable amount of spotlights.

In the bad example there is heavily directed movement and too many spotlights. The maximum you may have facing a direction is no more than three.

In the good example there has been consideration for directed movement with the two sets of metal detectors. This allows players to push either the left or right without excessive obstruction.

In the second example, there is reduced space for raiders creating a death tunnel where defenders have a disproportionate advantage. There are also five spotlights facing one direction when there can only be three. Two of the spotlights are so close together that they also form a near one-way defence.

The first example is okay, no directed movement, no head glitches and the spotlight is a reasonable distance away from the book shelf.

The second example shows directed movement with the fence blocking the main pathway to the storage area.

The good example is a reasonable defence with consideration for directed movement as barricades are spaced out.

The bad example completely blocks off an area to the left and creates a tunnel which heavily directs player movement.

The first example leaves enough space for raiders to get to the back room without obstruction and there is a reasonable amount of spotlights.

The second example has a spotlight which is so close to the bookcase that it can be used as a pixel peek.