The first thing you need to do to become Mayor is head over to the City Hall where you'll find two clerks waiting behind the desk. Walk up to one of these clerks and a menu will pop up allowing you to do several things

Go ahead and select "I'd like to run for mayor." You'll get a confirmation that looks like this

NOTE: You won't be able to run for mayor if you currently have a weapon on you so you'll have to put it away. After you've got your confirmation it won't matter whether or not you have a weapon so feel free to continue doing whatever you'd usually do. The only exception to this is that once you run for Mayor you'll no longer be able to join any jobs so be mindful of this if you planned on joining a job in the next 15 minutes.

The third and final way an election can start is if there is only one candidate for 30 minutes. This will cause the ballot to only have your name on it as well as an option for people to vote "None of the above" Now you know how to put your name forward and how elections are started let's move on to campaigning!

The best way to get your message across to a lot of people is through adverts! You can use them by doing /advert followed by your message be mindful of any promises you make during your campaign as citizens may get very angry if you break them, they may even remove you from office! Adverts cost $200 each and this is taken straight from your bank, try to keep adverts as realistic as possible or they may be taken down.

Another great way is by getting out there and talking to people, the best places to do that are Bazaar and City Hall as these places usually have people around them that will be heavily affected by your policies. However you choose to campaign make sure to do so safely and professionally, it's not allowed for you to have a shouting match or to slander others using /advert.

Now you have the complicated task of running the city, this can be done from the same NPC you used to sign up! Making broadcasts: You can use /broadcast as mayor, this is completely free and can be used to announce tax changes and different events you might be hosting!

When you click on the top option you'll be brought to another menu where you can change the taxes: 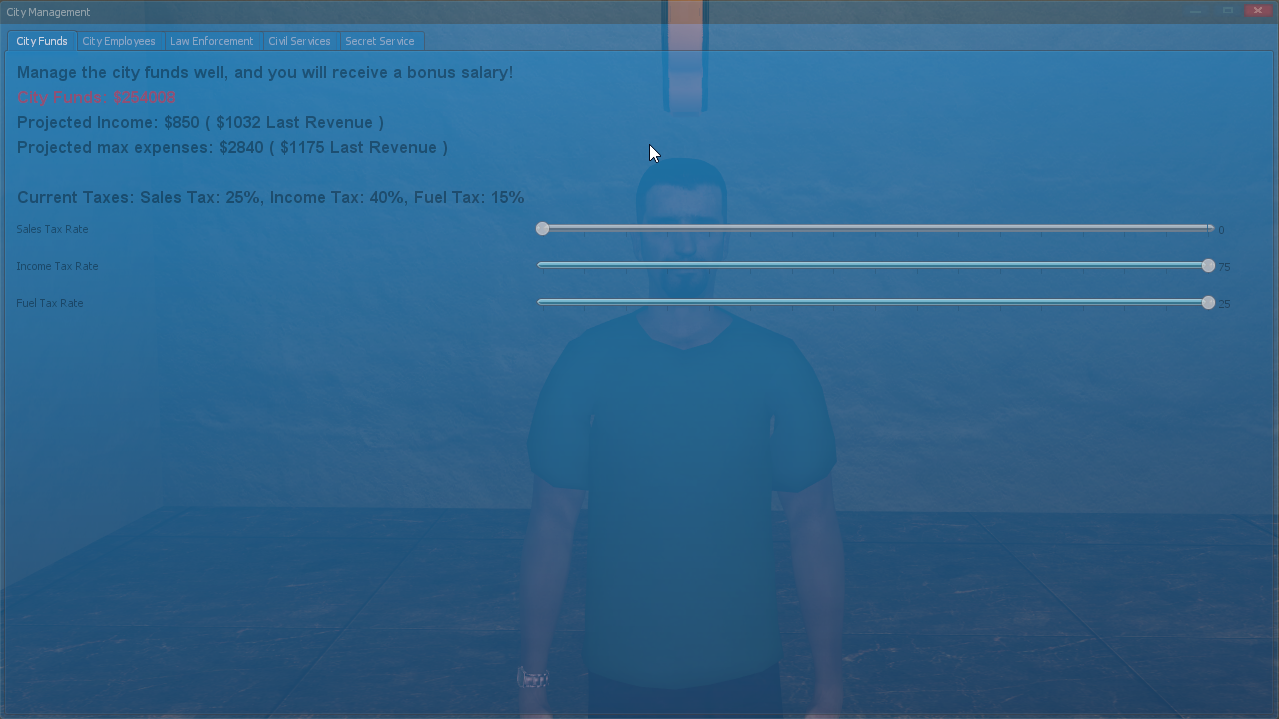 Here you're able to see your revenue, you should make sure to keep the City funds at a reasonable level at all times or you may be arrested and charged with misconduct, it also gives civilians a reason to remove you from office through less legal means.

Sales Tax: You should always aim to keep sales tax below 35% however I've found that the lower the sales tax the less crime there is and the more economic activity there is!

Fuel Tax: No one honestly really cares about this you should just put it to 25%.

You should ask people how they might feel about different tax policies to find one that works for you! 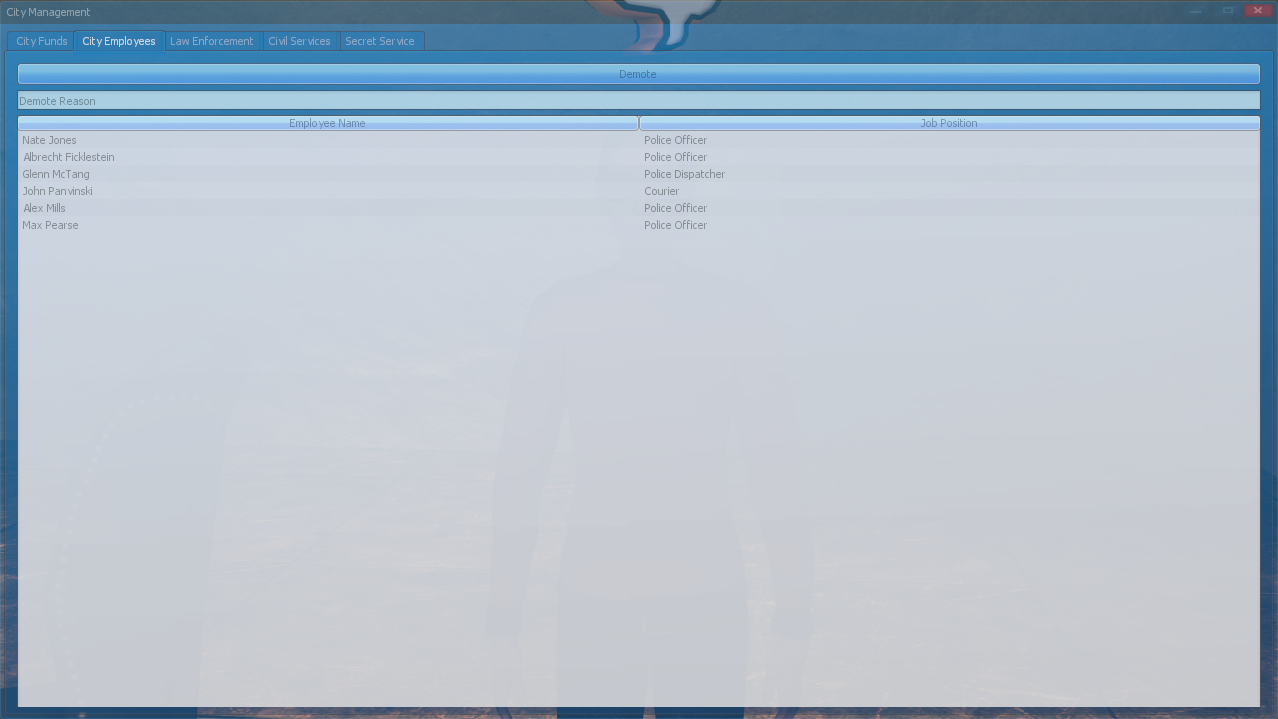 From the City Employees tab you can see all currently serving City Employees! You can also use this page to demote your Secret Service if you so wish, if you'd like to demote anyone else you have to speak to a PLPD supervisor!

From the Law Enforcement tab you can allocate funding in two different ways, first lets decide what to pay Police Officers per minute. You should try and keep this at a fairly reasonable level, above what they would be paid if there was no Mayor in order to keep the slots filled up and keep crime low in the city! Next you can pick how many cars you are going to fund for the department, I generally find if there are a lot of police officers on duty you should set this to the minimum to save money since most people will be able to spawn a car regardless and your limit will get quickly used up.

Under the Civil Services tab, you have a lot of control over how you fund public services, generally, you should aim to fund at least 1 vehicle for each job and keep the pay reasonable! Other than that what you do here is entirely up to you and what you feel the city needs.

Under the final tab, Secret Service, you can allocate funding for your personal security team. Personally, I would recommend having a security team of whatever size you decide as they are very useful in terms of getting you places and protecting you should someone fiercely disagree with your policies! Again you can demote Secret Service agents who are misbehaving under the City Employees tab!

Firstly there is law 4.4: 4.4 General Misconduct in a Public Office​ Any elected official or government employee who acts dishonestly and or not in accordance with the best interests of the city commits the offence of misconduct in a public office.

This is the law the police might use to remove you from office should you not be acting in good faith. for example, setting the taxes to 50% sparking a crime wave or allowing the city to go bankrupt.

This means you shouldn't even be breaking minor laws and should be acting professionally at all times while using /broadcast. You also shouldn't encourage illegal behaviour and you must report all crimes which take place in your presence to the police. 4.5 The Mayor​ The Mayor may not add-to, remove-from, and/or modify the Paralake Penal Code.

As the Mayor you are only a temporary caretaker, you can adjust the taxes and how funding is allocated but you must not make any changes to the Paralake Penal Code, should you have any ideas for how the law could be changed please make a post here: https://perpheads.com/forums/law-reform.42/

3.12 Mayoral Assassination​ The mayor may only be assassinated if it sufficiently benefits the players involved or if the mayor has negatively affected the players in a severe personal way. Where possible, players should attempt to directly convince the Mayor to improve city management or change their tax policies before attempting an assassination. Please note that any assassination of the mayor is very likely to be looked-into in depth and treated more strictly, meaning that players must have good reason for such actions.

Examples of reasons to justifiably assassinate the mayor include, but are not limited to: Failing to adhere to promises regarding city management & tax policy Discriminatory conduct towards diverse groups of people Any instance in which it would be justifiable to kill another player according to rule 2.5 General mismanagement of city affairs such as draining city funds or failing to fund emergency vehicles This is a useful rule to know as it can help you know what policies might require a greater security risk. Whilst there isn't a requirement for you to not give people a reason to assassinate you, you should always try your best to stay alive and not purposefully bring the city into chaos as this may hurt your reelection chances.

A few other things to note is that while the Mayor can own property and can base with other people, they shouldn't be doing anything illegal while you're there as you would have to report this to the police! You are also more than welcome to use your broadcast to enhance PassiveRP and maybe to host small scale RP events like running a cafe or judging a car competition at the farm! Make sure everything you do is within the law and you will be fine! Also, note that you are able to fish while mayor but you aren't able to craft.

From here it is completely up to you what to do, I hope you have found this guide useful and it has given you the knowledge you need to successfully serve as Mayor!

Full Credits go to nutrient11 / LilChicken for the creation of this guide.