The Firefighter role is mainly responsible for, as the name suggests, extinguishing fires around the city of Paralake. It is your duty to ensure that the citizens and government employees are safe from fires. This can include breaking doors down with a fire axe to access fires inside locked properties or using a fire hose to extinguish a large area that is ablaze. You are also expected to treat wounds from many sources of injury as you are provided with a First Aid Kit.

To become a firefighter you need to find your way to the Paralake Fire Department which is located next to the Slums Apartments. The map below highlights the location of the Fire Department : 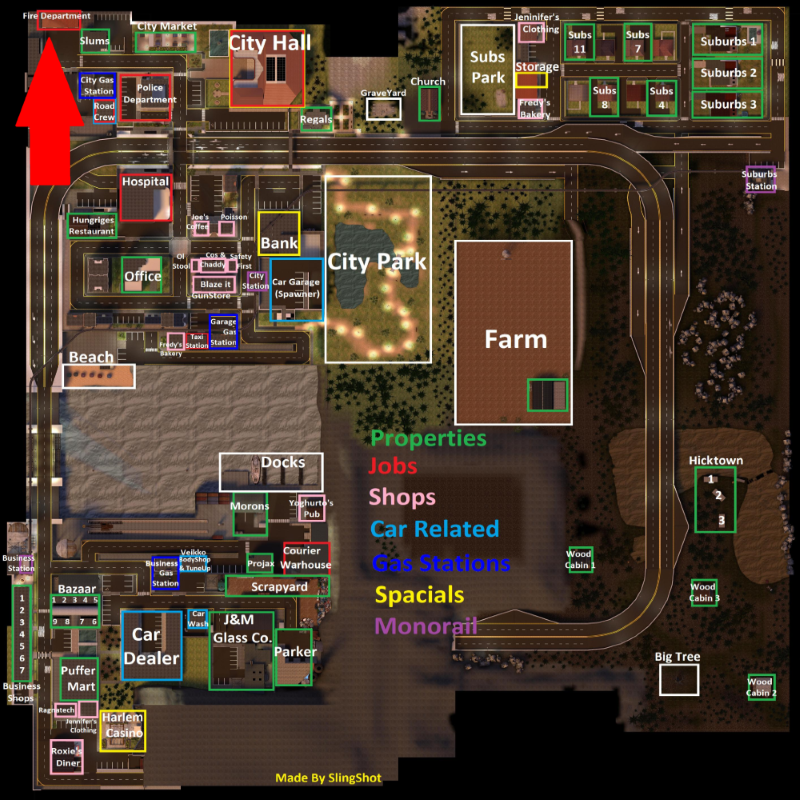 Interact with the NPC at the front desk inside the fire department by clicking E on it, the entrance is on the left. You will then be given an option to write a short exam which you must pass to be able to work as a firefighter. You must read the relevant rules/laws to be able to pass this exam. Rule 4.3 Firefighters explains what you must and must not do as a firefighter.

You can go over the rules using the following link : https://perpheads.com/rules.html

You can then go over the laws using the following link : https://perpheads.com/laws.html

Once you pass the exam interact with the NPC again and select "Yes, I'm interested in a position as a fire fighter" to become a firefighter. 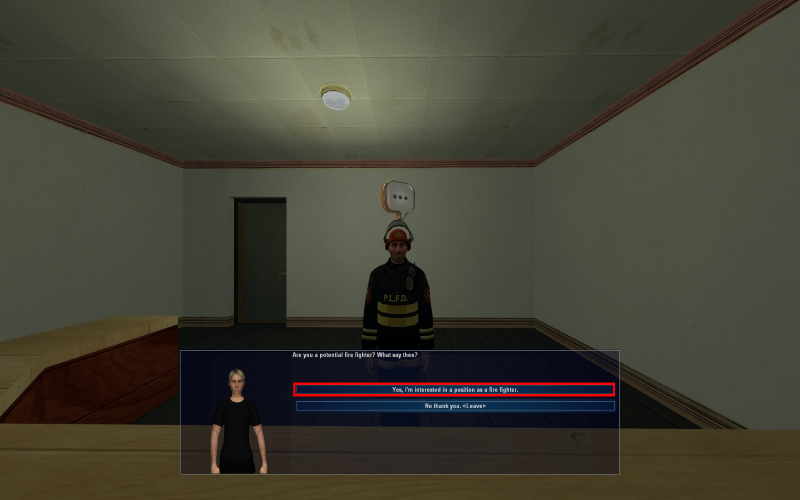 As a Firefighter you are provided with tools and abilities that enable you to do your duties. This section will go into detail about how to access such items and how to use them. You can access your tools by clicking the numbers shown in the pictures below or using your mouse scroll wheel and left clicking on them.

The Fire Hose is the most effective and quickest way to put out a fire. However, you must be nearby a fire engine or a fire hydrant to use it. You will receive $75 for extinguishing a fire with the fire hose

The Fire Extinguisher enables you to put out fires in areas where the fire hose will not work because of the lack of a water source. It is a portable fire fighting tool that does a brilliant job. It however does have only 500 units of extinguishing chemical in it and you will have to get a new extinguisher when the current one runs out of chemical.

The Fire Axe is a crucial tool that enables you to knock down locked doors when there is a fire nearby. This allows you to access locked areas that are on fire and save those trapped inside. Left click with your mouse on a door to use this, it might take a few hits to knock a door open.

As an firefighter you have the ability to perform CPR on unconscious bodies. The CPR is performed by taking out your fists and holding R while being close and looking at an unconscious players chest. The CPR function prolongs black screen up to 1 minute, CPR also has a small chance of reviving an unconscious body for players ranked Advanced Firefighters or above.

You can easily check how strong the pulse of an unconscious/dead body, this will make it easier for you as an firefighter to identify the bodies that require the most attention during an active accident. To check the pulse of an unconscious/dead body you will have to take out your fists and press E on the body. This will prompt you with a message in the bottom right corner about the state of this player.

At the rank of Advanced Firefighter you will unlock access to the Fire department Broadcasts. This tool can be utilized by using the command /FBC in the chat followed with a message you would like to broadcast to all the players in the server. This tool is only to be used for roleplay scenarios only. Here are some examples of appropriate messages to broadcast to the citizen of Paralake.

When are on duty as an firefighter you are provided with some medical equipment that you can use to heal yourself in case you get injured. These are bandages. The bandages will stop any bleeding. The bandages can be used by holding 'Q' and left clicking them in your inventory. Bandages can be refilled at the PD by talking to the NPC outside the supervisors office in the first floor.

When you pass the test to become a firefighter and go on duty for the first time you may notice that you receive the rank of Junior Firefighter. In the PLFD there is a ranking structure that will give different bonuses and benefits from each rank you climb. The rank structure is as follow from highest achievable rank to lowest:

To climb in the ranks as a firefighter you will need to do your duty as it is expected of you, your main source of XP comes from extinguishing fires, healing players with the First Aid Kit and performing CPR to unconscious bodies. Failing to do your duties in a correct manner can make you lose XP. Actions that will cause you to lose XP are getting yourself arrested or killing other players. You will also lose job XP if you die on duty so make sure to be careful and extinguish fires in a as safe as possible manner. Premium and Influence in your genetics tab will influence the amount of XP you get on duty, having active premium membership and influence points added to your genetics tree will allow you to level up quite a lot faster than if you have none of these activated.

Perks of ranking up

There are some perks you will get on achieving a higher rank within the PLFD, these are:

There are three vehicles of which you can choose from depending on what you need to do and the rank you withhold within the department. To select your vehicle talk to the NPC at the front desk at the Fire department, the NPC will give you an option to spawn in a vehicle. 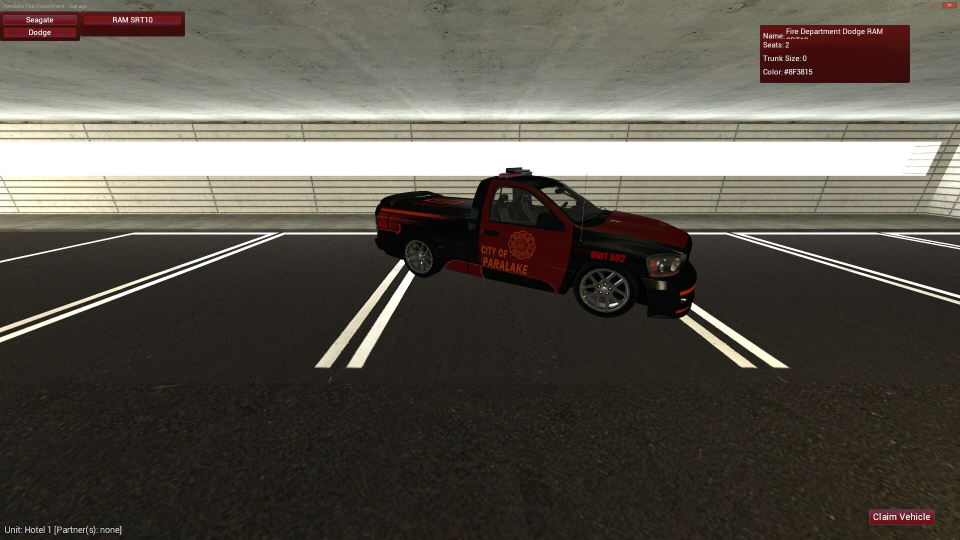 This vehicle is used to respond to incidents which can be seen in the Police Computer. However, unlike the fire engine, you are allowed to patrol the city with this vehicle. Using this vehicle allows for shorter response times due to its greater top speed compared to the fire engine. You also are not able to use this vehicle as a portable water source for your fire hose. To use a fire hose while going around with this vehicle you need to be next to a fire hydrant. There can only be two Dodge RAM's in use simultaneously on the server. 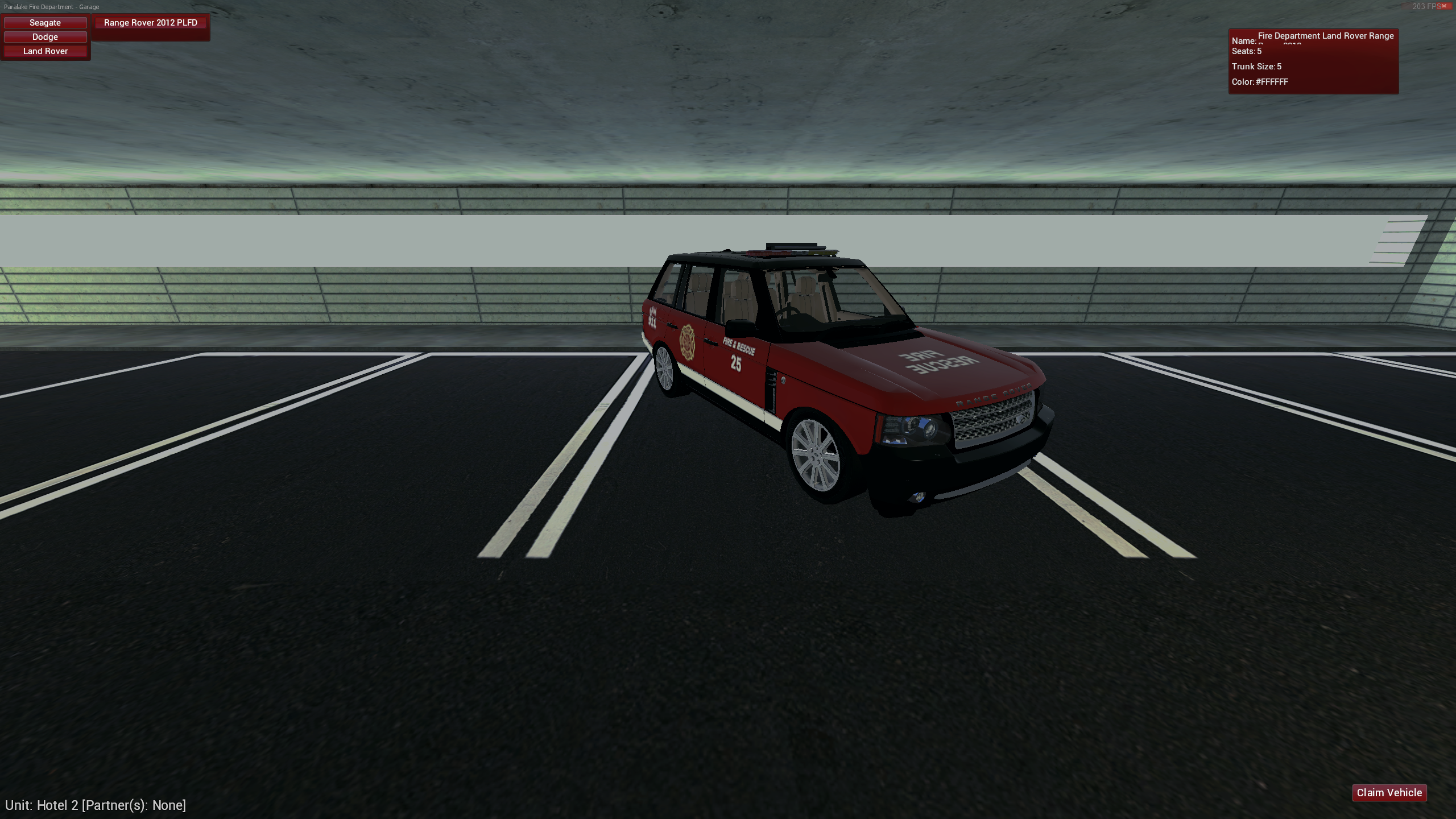 This vehicle will be unlocked for any firefighter with the rank Specialist Firefighter or above. The vehicle is a successor to the Dodge RAM and has the same field of use. This vehicle can be used for patrol and just like the dodge ram this vehicle allows for a greater response time, but you will need access to a fire hydrant or the Seagate Fire Truck to be able to utilize your fire hose. The Land Rover has 5 seats and allows for fast response time for an entire unit to non-flame related incidents. There can only be one Land rover in active use on the server. 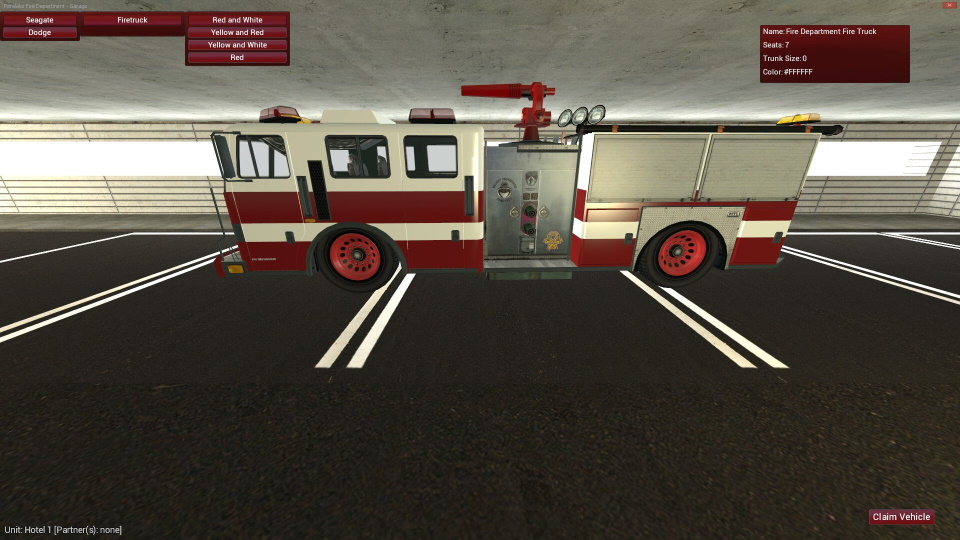 This vehicle on the other hand can only be used when responding to incidents. You cannot actively patrol in this vehicle and must remain at a government station awaiting a call. You can use this vehicle as a source of water for your fire hose when there are no fire hydrants nearby. There can only be two Seagate Fire Trucks in use simultaneously on the server.

To activate the emergency lights, press shift. For sirens, press Q. You can also use the bullhorn by pressing C. In each vehicle you can access the police computer to see the current incidents, create new ones or look at the current employees by clicking F3. You can Press B or use /gov to talk to other government units, you can also press N to talk on unit radio.